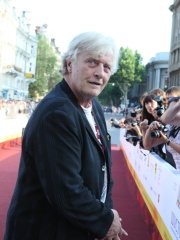 Rutger Oelsen Hauer (Dutch: [ˈrʏtxər ˈulsə(n) ˈɦʌuər]; 23 January 1944 – 19 July 2019) was a Dutch actor. In 1999, he was named by the Dutch public as the Best Dutch Actor of the Century.Hauer's career began in 1969 with the title role in the Dutch television series Floris and surged with his leading role in Turkish Delight (1973), which in 1999 was named the Best Dutch Film of the Century. After gaining international recognition with Soldier of Orange (1977) and Spetters (1980), he moved into American films such as Nighthawks (1981) and Blade Runner (1982), starring in the latter as self-aware android Roy Batty. Read more on Wikipedia

Since 2007, the English Wikipedia page of Rutger Hauer has received more than 4,945,394 page views. His biography is available in 54 different languages on Wikipedia making him the 51st most popular actor.

Among ACTORS In Netherlands