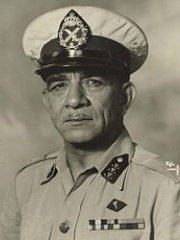 Mohamed Bey Naguib Youssef Qutb El-Qashlan (Arabic: الرئيس اللواء محمد بك نجيب يوسف قطب القشلان, Egyptian Arabic pronunciation: [mæˈħæmmæd næˈɡiːb]; 19 February 1901 – 28 August 1984), also known as Mohamed Naguib, was an Egyptian revolutionary, and, along with Gamal Abdel Nasser, one of the two principal leaders of the Egyptian Revolution of 1952 that toppled the monarchy of Egypt and Sudan, leading to the establishment of the Republic of Egypt, and the independence of Sudan. A distinguished and decorated general who was wounded in action in the Arab-Israeli War of 1948, he became the leader of the Free Officers Movement of nationalist army officers opposed to the continued presence of British troops in Egypt and Sudan, and the corruption and incompetence of King Farouk. Following the toppling of Farouk in July 1952, Naguib went on to serve as the head of the Revolutionary Command Council, the prime minister, and first president of Egypt, successfully negotiating the independence of Sudan (hitherto a condominium of Egypt and the United Kingdom), and the withdrawal of all British military personnel from Egypt. Read more on Wikipedia

Mohamed Naguib is most famous for being the first president of Egypt after the Egyptian Revolution of 1952.

Among politicians, Mohamed Naguib ranks 1,605 out of 15,577. Before him are Alfonso VIII of Castile, Sergey Shoygu, Frederick Augustus I of Saxony, Maria Luisa of Spain, Frederick III, Elector of Saxony, and Lajos Kossuth. After him are Amon of Judah, Bernhard von Bülow, Kim Yong-nam, Śuddhodana, Yoshihide Suga, and Menelik II.