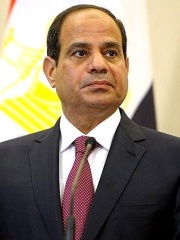 Abdel Fattah Saeed Hussein Khalil el-Sisi (born 19 November 1954) is a retired military officer and Egyptian politician who has served as the sixth and current president of Egypt since 2014. Before retiring as a general in the Egyptian military in 2014, Sisi served as Egypt’s deputy prime minister from 2013 to 2014, as its minister of defense from 2012 to 2013, and as its director of military intelligence from 2010 to 2012.Sisi was born in Cairo in 1954. As a young man, he joined the Egyptian Army and held a post in Saudi Arabia before enrolling in the Egyptian Army's Command and Staff College. Read more on Wikipedia

Abdel Fattah el-Sisi was the Egyptian military leader who overthrew the Muslim Brotherhood and became president of Egypt in 2013.

Among politicians, Abdel Fattah el-Sisi ranks 1,876 out of 15,710. Before him are Michael the Brave, Mohammed Daoud Khan, Francis, Duke of Anjou, Dihya, Sima Zhao, and Otto Strasser. After him are Afonso II of Portugal, Emperor Huizong of Song, Lucius Quinctius Cincinnatus, Canute IV of Denmark, Hongzhi Emperor, and Sancho I of Portugal.