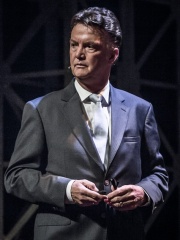 Aloysius Paulus Maria "Louis" van Gaal OON (Dutch pronunciation: [luˈʋi vɑŋ ˈɣaːl] (listen); born 8 August 1951) is a Dutch former football manager and player. At club level, he served as manager of Ajax, Barcelona, AZ Alkmaar, Bayern Munich and Manchester United, as well as having three spells in charge of the Netherlands national team. Van Gaal is one of the most decorated managers in world football, having won 20 major honours in his managerial career. He is sometimes nicknamed the "Iron Tulip".Before his career as a coach, Van Gaal played as a midfielder for Royal Antwerp, Telstar, Sparta Rotterdam, Ajax and AZ. Read more on Wikipedia

Louis van Gaal is most famous for his coaching career. He has coached teams such as Ajax, Barcelona, AZ, Bayern Munich, Manchester United, and the Netherlands national team.