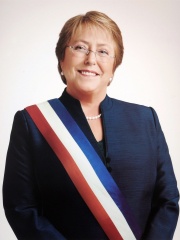 Verónica Michelle Bachelet Jeria (Spanish: [βeˈɾonika miˈʃel βaʃeˈle ˈxeɾja]; born 29 September 1951) is a Chilean politician who served as United Nations High Commissioner for Human Rights from 2018 to 2022. She previously served as President of Chile from 2006 to 2010 and 2014 to 2018 for the Socialist Party of Chile; she is the first woman to hold the Chilean presidency and the first elected female leader in South America. After leaving the presidency in 2010 and while not immediately reelectable, she was appointed the first executive director of the newly created United Nations Entity for Gender Equality and the Empowerment of Women. Read more on Wikipedia

Among politicians, Michelle Bachelet ranks 1,290 out of 15,577. Before her are Paul Bocuse, Stateira II, Camille Desmoulins, Walther Funk, Theophilos, and Ion Iliescu. After her are Nitocris, Jean-Marie Le Pen, Güyük Khan, Christian VIII of Denmark, Hussein bin Ali, Sharif of Mecca, and Amalric of Jerusalem.