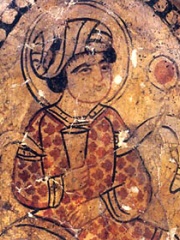 Abū ʿAlī Manṣūr (13 August 985 – 13 February 1021), better known by his regnal name al-Ḥākim bi-Amr Allāh (Arabic: الحاكم بأمر الله‎, lit. 'The Ruler by the Order of God'), was the sixth Fatimid caliph and 16th Ismaili imam (996–1021). Al-Hakim is an important figure in a number of Shia Ismaili sects, such as the world's 15 million Nizaris and 1-2 million Musta’lis, in addition to the 2 million Druze of the Levant whose eponymous founder Hamza ibn Ali ibn Ahmad proclaimed him as the incarnation of God in 1018.Histories of al-Hakim can prove controversial, as diverse views of his life and legacy exist. Read more on Wikipedia

Al-hakim bi-amr allah is most famous for his legal and theological opinions. He was a scholar of Islamic law, jurisprudence, and theology.

Among politicians, Al-Hakim bi-Amr Allah ranks 1,635 out of 15,710. Before him are Theodore II Laskaris, James I of Scotland, Lucius Caesar, Bao Zheng, Lü Buwei, and Injo of Joseon. After him are Fredrik Bajer, Hisham ibn Abd al-Malik, Koxinga, Levi Eshkol, Gwanghaegun of Joseon, and Leontios.