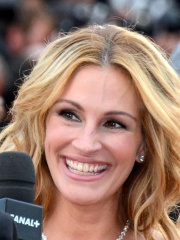 Julia Fiona Roberts (born October 28, 1967) is an American actress. One of Hollywood's most bankable stars, Roberts is known for her leading roles in films of several genres, from romantic comedies and dramas to thrillers and action films. Many of her films have earned over $100 million at the worldwide box office, and six have ranked among the highest-grossing films of their respective years. Read more on Wikipedia

Julia Roberts is most famous for her role in Pretty Woman.

Among people born in 1967, Julia Roberts ranks 5. Before her are Vin Diesel, Jason Statham, Kurt Cobain, and Nicole Kidman. After her are Roberto Baggio, Suman Pokhrel, Jürgen Klopp, David Guetta, Kane, Sung Jae-gi, and Willem-Alexander of the Netherlands.