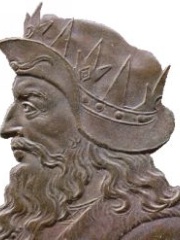 Chlodio (died probably after 450 also Clodio, Clodius, Clodion, Cloio or Chlogio, was a Frankish king who attacked, and apparently then ruled, Roman-inhabited lands around Cambrai and Tournai. He is known from very few records. His influence probably reached as far south as the River Somme. Read more on Wikipedia

Chlodio is most famous for being the first king of the Franks. He was the son of Merovech, the grandson of Clodius, and the father of Childeric I.

Page views of Chlodios by language

Among politicians, Chlodio ranks 1,334 out of 15,577. Before him are Ghazan, Jephthah, Lazar of Serbia, Millard Fillmore, Theodor Heuss, and Eleftherios Venizelos. After him are Kara Ahmed Pasha, Polycrates, Christine Lagarde, Cheoljong of Joseon, Wenceslaus III of Bohemia, and Shang Yang.