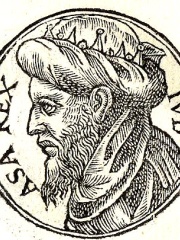 Asa (Hebrew: אָסָא‎‎, Modern: ʾAsaʾ, Tiberian: ʾĀsāʾ; Greek: Ασά; Latin: Asa) was, according to the Hebrew Bible, the third king of the Kingdom of Judah and the fifth king of the House of David. The Hebrew Bible gives the period of his reign between 40–41 years. His reign is dated between 913–910 BC to 873–869 BC. He was succeeded by Jehoshaphat, his son (by Azubah). Read more on Wikipedia

Since 2007, the English Wikipedia page of Asa of Judah has received more than 514,271 page views. His biography is available in 41 different languages on Wikipedia. Asa of Judah is the 1,324th most popular politician (down from 1,169th in 2019).

Asa is most famous for the reforms he made in Judah, including the abolition of the worship of idols and the removal of the high places. He also ordered the construction of fortresses and towers in Jerusalem and other cities.

Page views of Asa of Judahs by language

Among politicians, Asa of Judah ranks 1,324 out of 15,577. Before him are Esarhaddon, Louis Philippe II, Duke of Orléans, Frederick VII of Denmark, Huni, Beyhan Sultan, and Constantine IV. After him are Simon of Cyrene, Abijah of Judah, David II of Scotland, Ghazan, Jephthah, and Lazar of Serbia.

Others Deceased in 873 BC