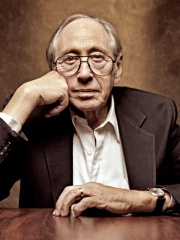 Alvin Eugene Toffler (October 4, 1928 – June 27, 2016) was an American writer, futurist, and businessman known for his works discussing modern technologies, including the digital revolution and the communication revolution, with emphasis on their effects on cultures worldwide. He is regarded as one of the world's outstanding futurists.Toffler was an associate editor of Fortune magazine. Read more on Wikipedia

Alvin Toffler is most famous for his book Future Shock, which was published in 1970. The book discusses the effects of the rapid pace of technological change on individuals and society.

Among writers, Alvin Toffler ranks 407 out of 5,755. Before him are Edward Said, Arion, Lysias, Paul Auster, Propertius, and Martial. After him are Tom Clancy, W. B. Yeats, Sholem Aleichem, Gertrude Stein, Saint-John Perse, and Thomas Bernhard.