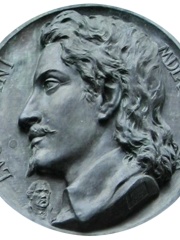 Lucilio Vanini (1585 – 9 February 1619), who, in his works, styled himself Giulio Cesare Vanini, was an Italian philosopher, physician and free-thinker, who was one of the first significant representatives of intellectual libertinism. He was among the first modern thinkers who viewed the universe as an entity governed by natural laws (nomological determinism). He was also an early literate proponent of biological evolution, maintaining that humans and other apes have common ancestors. Read more on Wikipedia

Lucilio Vanini was a 17th century Italian atheist who was most famous for his book, "The Atheist's Tragedy."

Among philosophers, Lucilio Vanini ranks 416 out of 1,089. Before him are Hipparchia of Maroneia, Charles Taylor, Nelson Goodman, Siger of Brabant, Nicephorus Gregoras, and Étienne Gilson. After him are Archelaus, Eubulides, Francis Hutcheson, Norberto Bobbio, Ernesto Laclau, and John Philoponus.