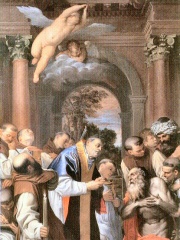 Agostino Carracci (or Caracci) (16 August 1557 – 22 March 1602) was an Italian painter, printmaker, tapestry designer, and art teacher. He was, together with his brother, Annibale Carracci, and cousin, Ludovico Carracci, one of the founders of the Accademia degli Incamminati (Academy of the Progressives) in Bologna. This teaching academy promoted the Carracci emphasized drawing from life. Read more on Wikipedia

Agostino Carracci is most famous for his contributions to the art of painting. He was born in Bologna, Italy and died in Rome. He was a member of the Carracci family of painters.

Among people born in 1557, Agostino Carracci ranks 4. Before him are Matthias, Holy Roman Emperor, Feodor I of Russia, and Giovanni Gabrieli. After him are Sophie of Mecklenburg-Güstrow, Stephen Bocskai, Balthasar Gérard, Oda Nobutada, Lew Sapieha, Frederick I, Duke of Württemberg, Thomas Morley, and Jean de Sponde. Among people deceased in 1602, Agostino Carracci ranks 2. Before him is Giacomo della Porta. After him are Renata of Lorraine, Emilio de' Cavalieri, Abu'l-Fazl ibn Mubarak, Ii Naomasa, Li Zhi, Friedrich Wilhelm I, Duke of Saxe-Weimar, Catherine of Brandenburg-Küstrin, Thomas Morley, and Juan de Fuca.