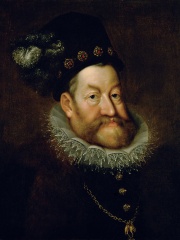 Rudolf II (18 July 1552 – 20 January 1612) was Holy Roman Emperor (1576–1612), King of Hungary and Croatia (as Rudolf I, 1572–1608), King of Bohemia (1575–1608/1611) and Archduke of Austria (1576–1608). He was a member of the House of Habsburg. Rudolf's legacy has traditionally been viewed in three ways: an ineffectual ruler whose mistakes led directly to the Thirty Years' War; a great and influential patron of Northern Mannerist art; and an intellectual devotee of occult arts and learning which helped seed what would be called the Scientific Revolution. Read more on Wikipedia

Rudolf II, Holy Roman Emperor is most famous for being the emperor during the Thirty Years War.

Among politicians, Rudolf II, Holy Roman Emperor ranks 287 out of 15,577. Before him are Alexander II of Russia, Charles II of Spain, Septimius Severus, Peter III of Russia, Mehmed V, and Philip II of France. After him are Sejong the Great, Konstantin Chernenko, Joachim von Ribbentrop, Vyacheslav Molotov, Hatice Sultan, and Ahmed III.