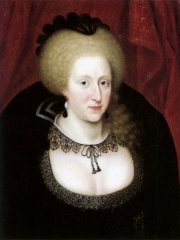 Anne of Denmark (Danish: Anna; 12 December 1574 – 2 March 1619) was the wife of King James VI and I; as such, she was Queen of Scotland from their marriage on 20 August 1589 and Queen of England and Ireland from the union of the Scottish and English crowns on 24 March 1603 until her death in 1619.The second daughter of King Frederick II of Denmark and Sophie of Mecklenburg-Güstrow, Anne married James at age 14. They had three children who survived infancy: Henry Frederick, Prince of Wales, who predeceased his parents; Princess Elizabeth, who became Queen of Bohemia; and James's future successor, Charles I. Anne demonstrated an independent streak and a willingness to use factional Scottish politics in her conflicts with James over the custody of Prince Henry and his treatment of her friend Beatrix Ruthven. Anne appears to have loved James at first, but the couple gradually drifted and eventually lived apart, though mutual respect and a degree of affection survived.In England, Anne shifted her energies from factional politics to patronage of the arts and constructed her own magnificent court, hosting one of the richest cultural salons in Europe. Read more on Wikipedia

Anne of Denmark was the wife of King James VI of Scotland and I of England. She is most famous for being the mother of Charles I.

Page views of Anne of Denmarks by language

Among companions, Anne of Denmark ranks 149 out of 673. Before her are Elizabeth of Bosnia, Albert VII, Archduke of Austria, Julie Clary, Princess Victoria of Hesse and by Rhine, Isabella of Portugal, Queen of Castile, and Priscilla Presley. After her are Marie Henriette of Austria, Elizabeth Alexeievna, Eleanor of Austria, Queen of Poland, Isabella of Angoulême, Emma of Waldeck and Pyrmont, and Amalasuntha.