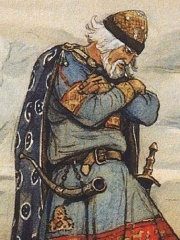 Oleg the Prophet (Old East Slavic: Ѡлегъ Olegŭ; Old Norse: Helgi; Russian: Олег Вещий, romanized: Oleg Veshchy, lit. 'Oleg the Prophet'; Ukrainian: Олег Віщий, romanized: Oleh Vishchyi) was a Rurikid prince who ruled all or part of the Rus' people during the late 9th and early 10th centuries. He is credited by Rus' Chronicles with moving from either Staraya Ladoga (Old Norse: Aldeigjuborg) or Novgorod, and seizing power in Kiev from Askold and Dir, and, by doing so, laying the foundation of the powerful state of Kievan Rus'. He also launched an attack on Constantinople, capital of the Byzantine Empire. Read more on Wikipedia

Oleg of Novgorod is most famous for his conquest of Kiev and founding of the Kievan Rus' empire.

Page views of Oleg of Novgorods by language

Among politicians, Oleg of Novgorod ranks 415 out of 15,577. Before him are Charles III of Spain, Louis Bonaparte, Louis VIII of France, George III of the United Kingdom, Baibars, and Yongle Emperor. After him are José Mujica, Matthias, Holy Roman Emperor, George II of Great Britain, Severus Alexander, Albert II of Belgium, and Henry the Fowler.

Among people born in 900, Oleg of Novgorod ranks 2. Before him is Ivar the Boneless. After him are Gorm the Old, Photios I of Constantinople, Halfdan Ragnarsson, Pope Lando, Ahmad ibn Fadlan, Pope Benedict VI, Pope Agapetus II, Pope Stephen VIII, Pope Leo VII, and Robert the Strong. Among people deceased in 912, Oleg of Novgorod ranks 1. After him are Leo VI the Wise, Ibn Khordadbeh, Otto I, Duke of Saxony, Abdullah ibn Muhammad al-Umawi, Zhu Wen, Rudolph I of Burgundy, Notker the Stammerer, Smbat I of Armenia, and Ahmad ibn Yusuf.