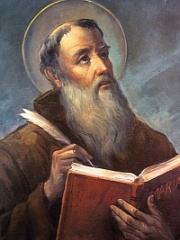 Lawrence of Brindisi (22 July 1559 – 22 July 1619), born Giulio Cesare Russo, was a Roman Catholic priest and a theologian as well as a member of the Order of Friars Minor Capuchin. An accomplished linguist, in addition to his native Italian, Lawrence could read and speak Latin, Hebrew, Greek, German, Czech, Spanish, and French fluently. Lawrence was ordained a priest at the age of 23. Read more on Wikipedia

Lawrence of Brindisi was a Catholic priest who was a diplomat during the time of the Holy Roman Empire. He is most famous for his speech in front of the Turkish Sultan Mehmed II, which saved the city of Vienna from being conquered by the Turks.

Page views of Lawrence of Brindisis by language

Among religious figures, Lawrence of Brindisi ranks 864 out of 2,272. Before him are John Eudes, Pierre Cauchon, Theodore of Mopsuestia, Jane Frances de Chantal, Thaïs, and John of Leiden. After him are John of Ávila, Joseph Franklin Rutherford, Mary Ann Nichols, Juliana of Nicomedia, Abdullah ibn Salam, and Gianna Beretta Molla.

Among people born in 1559, Lawrence of Brindisi ranks 5. Before him are Nurhaci, Johann Tserclaes, Count of Tilly, Albert VII, Archduke of Austria, and Ishida Mitsunari. After him are Catherine de Bourbon, Ōtani Yoshitsugu, Isaac Casaubon, Cigoli, and George Chapman. Among people deceased in 1619, Lawrence of Brindisi ranks 9. Before him are Anne of Denmark, Hans Lippershey, John Sigismund, Elector of Brandenburg, Ludovico Carracci, Lucilio Vanini, and Johan van Oldenbarnevelt. After him are Shimazu Yoshihiro, Hieronymus Fabricius, Denis Calvaert, Marko Krizin, Richard Burbage, and Nicholas Hilliard.