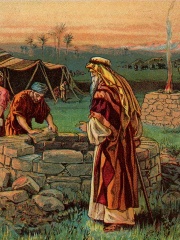 Isaac is one of the three patriarchs of the Israelites and an important figure in the Abrahamic religions, including Judaism, Christianity, and Islam. He was the son of Abraham and Sarah, the father of Jacob and Esau, and the grandfather of the twelve tribes of Israel. Isaac's name means "he will laugh", reflecting the laughter, in disbelief, of Abraham and Sarah, when told by God that they would have a child. Read more on Wikipedia

Since 2007, the English Wikipedia page of Isaac has received more than 3,721,348 page views. His biography is available in 88 different languages on Wikipedia (up from 84 in 2019). Isaac is the 18th most popular religious figure (up from 35th in 2019), the 6th most popular biography from Israel (up from 16th in 2019) and the 5th most popular Israeli Religious Figure.

Page views of Isaacs by language

Among religious figures, Isaac ranks 18 out of 2,238. Before him are Zoroaster, Saint Nicholas, Jacob, Pope John Paul II, Francis of Assisi, and Aaron. After him are Saint George, Saint Joseph, Andrew the Apostle, Elijah, John Calvin, and Ali.