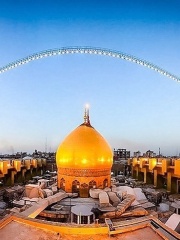 Abū ʿAbd Allāh al-Ḥusayn ibn ʿAlī ibn Abī Ṭālib (Arabic: أبو عبد الله الحسين بن علي بن أبي طالب, 10 January 626 – 10 October 680), also known as Husayn ibn Ali or Imam Husayn, was a grandson of the Islamic prophet Muhammad and a son of Ali ibn Abi Talib and Muhammad's daughter Fatima, as well as a younger brother of Hasan ibn Ali. He is the third Shia Imam after his brother, Hasan, and before his son, Ali ibn Husayn Zayn al-Abidin. He is considered a member of the Ahl al-Bayt as well as the Ahl al-Kisa, and he was a participant in the event of Mubahala. Read more on Wikipedia

Husayn ibn Ali is most famous for being the grandson of Muhammad and the son of Ali. He was killed in battle in 680 CE.

Among religious figures, Husayn ibn Ali ranks 35 out of 2,238. Before him are Martin of Tours, Jonah, Saint Stephen, John the Apostle, Pope Benedict XVI, and Saint Lucy. After him are Queen of Sheba, James, son of Zebedee, Samuel, Catherine of Alexandria, Pope John Paul I, and Pope John XXIII.