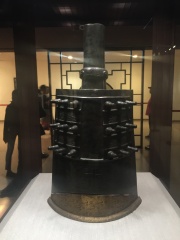 King Li of Zhou (died in 828 BC) (Chinese: 周厲王; pinyin: Zhōu Lì Wáng), personal name Ji Hu, was the tenth king of the Chinese Zhou Dynasty. Estimated dates of his reign are 877–841 BC or 857–842 BC (Cambridge History of Ancient China). King Li was a corrupt and decadent king. Read more on Wikipedia

Page views of King Li of Zhous by language

Among politicians, King Li of Zhou ranks 6,159 out of 15,577. Before him are Edmond Debeaumarché, Jean-Luc Dehaene, Francesco Farnese, Duke of Parma, Henryk IV Probus, Rimush, and 7th Dalai Lama. After him are Rahmon Nabiyev, Leland Stanford, Laurent Fabius, Emperor Go-Hanazono, Proclus of Constantinople, and Frederick William, Duke of Courland.

Others Deceased in 828 BC