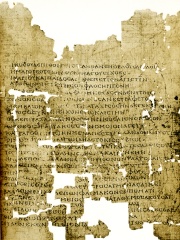 Callimachus (Ancient Greek: Καλλίμαχος, romanized: Kallimachos; c. 310 – c. 240 BC) was an ancient Greek poet, scholar and librarian who was active in Alexandria during the 3rd century BC. A representative of Ancient Greek literature of the Hellenistic period, he wrote over 800 literary works in a wide variety of genres, most of which did not survive. He espoused an aesthetic philosophy, known as Callimacheanism, which exerted a strong influence on the poets of the Roman Empire and, through them, on all subsequent Western literature. Born into a prominent family in the Greek city of Cyrene in modern-day Libya, he was educated in Alexandria, the capital of the Ptolemaic kings of Egypt. Read more on Wikipedia

Callimachus was a Greek poet and scholar who was born in Cyrene. He is most famous for his work the "Hymns" which are poems written in honor of various gods.

Page views of Callimachuses by language

Among writers, Callimachus ranks 363 out of 5,794. Before him are Apollonius of Rhodes, Elfriede Jelinek, Nadine Gordimer, Arthur de Gobineau, Einhard, and Ammianus Marcellinus. After him are Jacques Prévert, Shams Tabrizi, Alphonse de Lamartine, Mikhail Sholokhov, John Galsworthy, and Heinrich Mann.

Others Deceased in 240 BC

Among WRITERS In Libya

Among writers born in Libya, Callimachus ranks 1. After him are Ibrahim Kuni (1948).