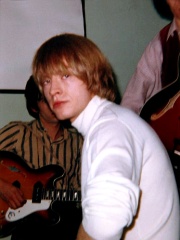 Lewis Brian Hopkin Jones (28 February 1942 – 3 July 1969) was an English musician and composer, best known as the founder and original leader of the Rolling Stones. Initially a slide guitarist, Jones went on to play a wide variety of instruments on Rolling Stones recordings and in concerts, including rhythm guitar, lead guitar, sitar, dulcimer, various keyboard instruments such as piano and mellotron, marimba, wind instruments such as harmonica, recorder, saxophone, as well as drums, vocals and numerous others. After he founded the Rolling Stones as a British blues outfit in 1962, and gave the band its name, Jones' fellow band members Keith Richards and Mick Jagger began to take over the band's musical direction, especially after they became a successful songwriting team. Read more on Wikipedia

Since 2007, the English Wikipedia page of Brian Jones has received more than 5,261,877 page views. His biography is available in 42 different languages on Wikipedia making him the 56th most popular musician.