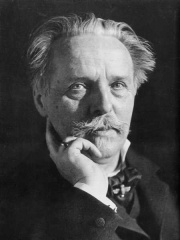 Karl Friedrich May ( MY, German: [kaʁl ˈmaɪ] (listen); 25 February 1842 – 30 March 1912) was a German author. He is best known for his 19th century novels of fictitious travels and adventures, set in the American Old West with Winnetou and Old Shatterhand as main protagonists and in the Orient and Middle East with fictional characters Kara Ben Nemsi and Hadschi Halef Omar. May also wrote novels set in Latin America, China and Germany, poetry, a play, and composed music; he was a proficient player of several musical instruments. Read more on Wikipedia

Karl May was a German author who wrote about the adventures of a fictional character named Old Shatterhand.

Among writers, Karl May ranks 317 out of 5,755. Before him are Prosper Mérimée, Mario Puzo, Raymond Chandler, Paul Celan, Callimachus, and Gregory of Tours. After him are François Mauriac, Jack Kerouac, Ezra Pound, Carlos Castaneda, Georges Bataille, and Arthur Schnitzler.