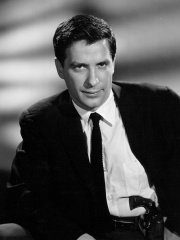 John Nicholas Cassavetes ( KASS-ə-VET-eez; Greek: Ιωάννης Νικόλαος Κασσαβέτης, romanized: Ioánnis Nikólaos Kassavétis; December 9, 1929 – February 3, 1989) was a Greek-American actor, film director, and screenwriter. First known as an actor on television and in film, Cassavetes also became a pioneer of American independent cinema, writing and directing movies financed in part with income from his acting work. AllMovie called him "an iconoclastic maverick," while The New Yorker suggested that he "may be the most influential American director of the last half century."As an actor, Cassavetes starred in notable Hollywood films throughout the 1950s and 1960s, including Edge of the City (1957), The Dirty Dozen (1967), and Rosemary's Baby (1968). Read more on Wikipedia

John Cassavetes is most famous for his independent films, which he made in the late 1950s and 1960s. He was a pioneer of the American independent film movement, and he was the first American director to win a prize at the Cannes Film Festival.