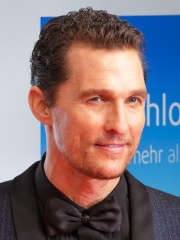 Matthew David McConaughey ( mə-KON-ə-hay; born November 4, 1969) is an American actor and producer. He had his breakout role with a supporting performance in the coming-of-age comedy Dazed and Confused (1993). After a number of supporting roles, his first success as a leading man came in the legal drama A Time to Kill (1996). Read more on Wikipedia

Matthew McConaughey is most famous for his performances in the films "Dazed and Confused," "A Time to Kill," "How to Lose a Guy in 10 Days," "The Wedding Planner," "Failure to Launch," "The Lincoln Lawyer," "Magic Mike," "Dallas Buyers Club," "Interstellar," and "The Wolf of Wall Street."