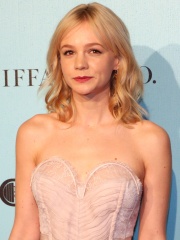 Carey Hannah Mulligan (born 28 May 1985) is an English actress. She made her professional acting debut on stage in the 2004 Kevin Elyot play Forty Winks at the Royal Court Theatre. Her film debut came with a supporting role in the romantic drama Pride & Prejudice (2005), followed by roles in television, including the drama series Bleak House (2005) and the television film Northanger Abbey (2007). Read more on Wikipedia

Among actors, Carey Mulligan ranks 3,831 out of 10,030. Before her are Michael B. Jordan, Andre Braugher, Joanne Whalley, Judge Reinhold, Sybil Danning, and Francesco Quinn. After her are Denis Lavant, Reginald Owen, Mark Addy, Nur Fettahoğlu, Clotilde Courau, and Heike Makatsch.