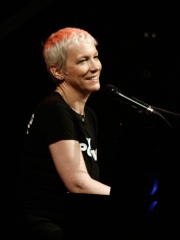 Ann Lennox (born 25 December 1954) is a Scottish singer-songwriter, political activist and philanthropist. After achieving moderate success in the late 1970s as part of the new wave band the Tourists, she and fellow musician Dave Stewart went on to achieve international success in the 1980s as Eurythmics. Appearing in the 1983 music video for "Sweet Dreams (Are Made of This)" with orange cropped hair and wearing a man's business suit, the BBC states, "all eyes were on Annie Lennox, the singer whose powerful androgynous look defied the male gaze". Read more on Wikipedia

Annie Lennox is most famous for her work with the Eurythmics and her solo career. She has won four Grammy Awards and an Academy Award for Best Original Song.