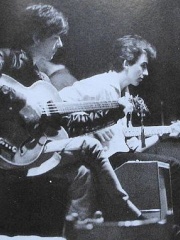 Stuart Fergusson Victor Sutcliffe (23 June 1940 – 10 April 1962) was a Scottish painter and musician best known as the original bass guitarist of the English rock band the Beatles. Sutcliffe left the band to pursue his career as a painter, having previously attended the Liverpool College of Art. Sutcliffe and John Lennon are credited with inventing the name "Beetles" (sic), as they both liked Buddy Holly's band, the Crickets. Read more on Wikipedia

Stuart Sutcliffe was a founding member of the Beatles. He played bass guitar and was one of the original members of the band. He was a good friend of John Lennon and was the only member of the Beatles to be born outside of the United Kingdom. He left the band in 1961 to pursue a career as an artist.

Among musicians, Stuart Sutcliffe ranks 125 out of 2,662. Before him are Chick Corea, Neil Young, John Dowland, Sid Vicious, Bill Wyman, and Joe Hisaishi. After him are Alice Cooper, Jacqueline du Pré, Till Lindemann, Roger Glover, Quincy Jones, and Mariss Jansons.