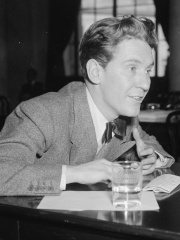 Oliver Burgess Meredith (November 16, 1907 – September 9, 1997) was an American actor, director, producer, and writer whose career encompassed theater, film and television. Active for more than six decades, Meredith has been called "a virtuosic actor" and "one of the most accomplished actors of the century". A lifetime member of the Actors Studio, he won several Emmys, was the first male actor to win the Saturn Award for Best Supporting Actor twice, and was nominated for two Academy Awards.He established himself as a leading man in Hollywood with critically acclaimed performances as George Milton in Of Mice and Men (1939), Ernie Pyle in The Story of G.I. Read more on Wikipedia

Burgess Meredith was most famous for his role as Rocky Balboa's trainer, Mickey Goldmill, in the Rocky films.