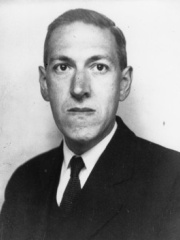 Howard Phillips Lovecraft (US: ; August 20, 1890 – March 15, 1937) was an American writer of weird, science, fantasy, and horror fiction. Lovecraft is best known for his creation of a body of work that became known as the Cthulhu Mythos.Born in Providence, Rhode Island, Lovecraft spent most of his life in New England. After his father was institutionalized for general paresis in 1893, he lived affluently, but his family's wealth dissipated soon after the death of his grandfather. Read more on Wikipedia

H.P. Lovecraft is most famous for his horror fiction, with works such as "The Call of Cthulhu," "The Colour Out of Space," and "The Dunwich Horror."

Among writers, H. P. Lovecraft ranks 147 out of 5,794. Before him are Tove Jansson, Aldous Huxley, Haruki Murakami, Catullus, J. D. Salinger, and John Steinbeck. After him are Pliny the Younger, Ferdowsi, Lou Andreas-Salomé, André Breton, Mikhail Bulgakov, and Pindar.