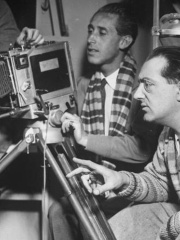 Friedrich Christian Anton Lang (German: [fʁɪt͡s ˈkʁɪsti̯an ˈantɔn laŋ]; December 5, 1890 – August 2, 1976), known as Fritz Lang, was an Austrian film director, screenwriter, and producer who worked in Germany and later the United States. One of the best-known émigrés from Germany's school of Expressionism, he was dubbed the "Master of Darkness" by the British Film Institute. He has been cited as one of the most influential filmmakers of all time.Lang's most celebrated films include the groundbreaking futuristic Metropolis (1927) and the influential M (1931), a film noir precursor. Read more on Wikipedia

Since 2007, the English Wikipedia page of Fritz Lang has received more than 2,137,122 page views. His biography is available in 62 different languages on Wikipedia. Fritz Lang is the 31st most popular film director (up from 33rd in 2019), the 65th most popular biography from Austria (up from 70th in 2019) and the most popular Austrian Film Director.

Fritz Lang is most famous for his film Metropolis, which was one of the first science fiction films.

Among FILM DIRECTORS In Austria