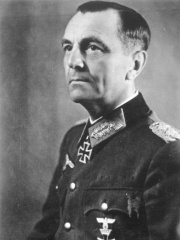 Friedrich Wilhelm Ernst Paulus (23 September 1890 – 1 February 1957) was a German field marshal during World War II who is best known for commanding the 6th Army during the Battle of Stalingrad (August 1942 to February 1943). The battle ended in disaster for the Wehrmacht when Soviet forces encircled the Germans within the city, leading to the ultimate defeat and capture of about 265,000 German personnel, their Axis allies and collaborators. Paulus fought in World War I and saw action in France and the Balkans. Read more on Wikipedia

Friedrich Paulus was a German field marshal who is most famous for being the commander of the 6th Army at Stalingrad.

Among military personnels, Friedrich Paulus ranks 22 out of 1,466. Before him are Heinz Guderian, Erich von Manstein, Prince Eugene of Savoy, Pyrrhus of Epirus, Ptolemy I Soter, and Wilhelm Keitel. After him are Oda Nobunaga, Cesare Borgia, Simo Häyhä, Vercingetorix, Ratko Mladić, and Alfred Dreyfus.