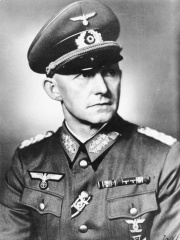 Alfred Josef Ferdinand Jodl (German: [ˈjoːdl̩] (listen); 10 May 1890 – 16 October 1946) was a German Generaloberst who served as the chief of the Operations Staff of the Oberkommando der Wehrmacht – the German Armed Forces High Command – throughout World War II. After the war, Jodl was indicted on charges of conspiracy to commit crimes against peace, planning, initiating and waging wars of aggression, war crimes and crimes against humanity at the Allied-organised Nuremberg trials. The principal charges against him related to his signature of the criminal Commando and Commissar Orders. Read more on Wikipedia

Alfred Jodl was a German military officer who served as Chief of the Operations Staff of the Armed Forces High Command (Oberkommando der Wehrmacht) during World War II. He was convicted of war crimes at the Nuremberg Trials and executed by hanging.