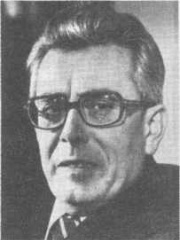 Arnaldo Forlani, (Italian pronunciation: [arˈnaldo forˈlaːni]; born 8 December 1925) is an Italian politician who served as the 43rd Prime Minister of Italy from 18 October 1980 to 28 June 1981. He also held the office of Deputy Prime Minister, Minister of Foreign Affairs and Minister of Defence.Forlani, a member of the right-wing of the Christian Democracy, was one of the most prominent Italian politicians from the 1970s to early 1990s. Read more on Wikipedia

Since 2007, the English Wikipedia page of Arnaldo Forlani has received more than 80,413 page views. His biography is available in 27 different languages on Wikipedia making him the 9,185th most popular politician.

Among politicians, Arnaldo Forlani ranks 9,141 out of 14,801. Before him are Constance of France, Princess of Antioch, Nicolae Rădescu, David A. Granger, Eurymedon, Joseph Lebeau, and Mehmet Ali Talat. After him are Jan Eliasson, Powhatan, Kurt Schmitt, Mikhail Rodzianko, Bisinus, and Ma Bufang.