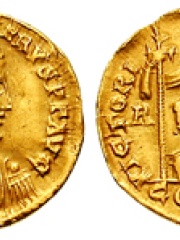 Libius Severus (died 465), sometimes enumerated as Severus III, was Roman emperor of the West from 461 to his death in 465. A Roman senator from Lucania Severus was one of the last Western emperors, emptied of any effective power (the real power was in the hands of the magister militum Ricimer), and unable to solve the many problems affecting the empire; the sources describe him as a pious Christian. Read more on Wikipedia

Libius Severus was a Roman emperor who ruled for a short time in the year 193. He is most famous for being the first emperor to convert to Christianity.

Among politicians, Libius Severus ranks 1,326 out of 15,710. Before him are Hans Fritzsche, Hussein bin Ali, Sharif of Mecca, Ludwig III of Bavaria, Berke, Mahmoud Ahmadinejad, and La Malinche. After him are Frederick I of Denmark, Tancred, Prince of Galilee, Theodor Heuss, Lucullus, Qin Er Shi, and Harald Hardrada.