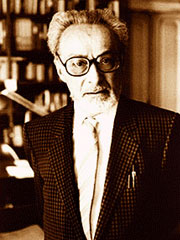 Primo Michele Levi (Italian: [ˈpriːmo ˈlɛːvi]; 31 July 1919 – 11 April 1987) was an Italian chemist, partisan, writer, and Jewish Holocaust survivor. He was the author of several books, collections of short stories, essays, poems and one novel. His best-known works include If This Is a Man (1947, published as Survival in Auschwitz in the United States), his account of the year he spent as a prisoner in the Auschwitz concentration camp in Nazi-occupied Poland; and The Periodic Table (1975), linked to qualities of the elements, which the Royal Institution named the best science book ever written.Levi died in 1987 from injuries sustained in a fall from a third-story apartment landing. Read more on Wikipedia

Primo Levi is most famous for his memoir about his time in Auschwitz, "Survival in Auschwitz."

Among writers, Primo Levi ranks 280 out of 5,794. Before him are William Wordsworth, Adam Mickiewicz, Paul Valéry, Jordanes, Karl May, and Alice Munro. After him are Anna Wintour, Michael Ende, Leopold von Sacher-Masoch, Chrétien de Troyes, Al-Masudi, and Marguerite Duras.