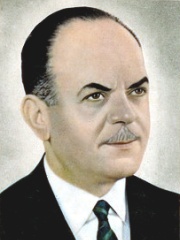 Geórgios Papadopoulos (; Greek: Γεώργιος Παπαδόπουλος [ʝeˈorʝi.os papaˈðopulos]; 5 May 1919 – 27 June 1999) was a Greek military officer and political leader who ruled Greece as a military dictator from 1967 to 1973. He joined the Royal Hellenic Army during the Second World War and resisted the 1940 Italian invasion. Later on, he allegedly became an active Axis collaborator with the Security Battalions, although this claim has been disputed by historians. Read more on Wikipedia

Georgios Papadopoulos was a Greek military officer who led a coup d'état that overthrew King Constantine II of Greece and his government.

Among politicians, Georgios Papadopoulos ranks 1,926 out of 15,577. Before him are Salome Zourabichvili, Abd al-Rahman II, Masoud Barzani, John I of Castile, Ismail II, and Attalus I. After him are William V, Prince of Orange, Hotepsekhemwy, Milo of Croton, Ananda Mahidol, Lütfi Pasha, and Jim Mattis.