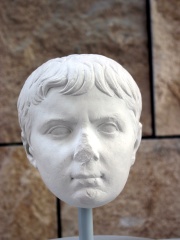 Gaius Caesar (; 20 BC – 21 February 4 AD) was the grandson and heir to the throne of Roman emperor Augustus, alongside his younger brother Lucius Caesar. Although he was born to Marcus Vipsanius Agrippa and Julia, Augustus' only daughter, Gaius and his younger brother, Lucius Caesar, were raised by their grandfather as his adopted sons and joint-heirs to the empire. He would experience an accelerated political career befitting a member of the Julio-Claudian dynasty, with the Roman Senate allowing him to advance his career without first holding a quaestorship or praetorship, offices that ordinary senators were required to hold as part of the cursus honorum.In 1 BC, Gaius was given command of the eastern provinces, after which he concluded a peace treaty with King Phraates V of Parthia on an island in the Euphrates. Shortly afterwards, he was appointed to the office of consul for the following year, 1 AD. Read more on Wikipedia

Gaius Julius Caesar is most famous for being a Roman general and politician who conquered Gaul, led the Roman army across the Rubicon, and became dictator of Rome.

Among noblemen, Gaius Caesar ranks 101 out of 842. Before him are Duke Maximilian Joseph in Bavaria, Roger I of Sicily, Albert I of Germany, Maximilian I, Elector of Bavaria, Duchess Helene in Bavaria, and Ramesses VI. After him are Joan of France, Duchess of Berry, Gian Galeazzo Sforza, Joanna I of Naples, Prince Andrew, Duke of York, Queen Fabiola of Belgium, and Hugh the Great.

Others Born in 20 BC