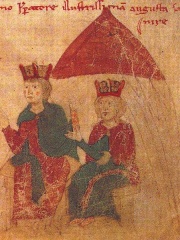 Constance I (Italian: Costanza; 2 November 1154 – 27 November 1198) was reigning Queen of Sicily from 1194–98, jointly with her spouse from 1194 to 1197, and with her infant son Frederick II, Holy Roman Emperor, in 1198, as the heiress of the Norman kings of Sicily. She was also Holy Roman Empress and later Dowager by marriage to Henry VI, Holy Roman Emperor. When she was young, as the sole heir to the throne of Sicily, she didn't marry until she was 30 because of an ominous prophecy; shortly after becoming empress she was involved in the succession war against her illegitimate nephew King Tancred of Sicily for the Sicilian throne, during which, rarely for an empress, she was captured during such an offensive campaign, though finally without danger she escaped. Read more on Wikipedia

Constance, Queen of Sicily is most famous for being the mother of Roger II, who would go on to become the King of Sicily.

Page views of Constance, Queen of Sicilies by language

Among companions, Constance, Queen of Sicily ranks 127 out of 673. Before her are Umm Kulthum bint Muhammad, Victoria Eugenie of Battenberg, Maria of Aragon, Queen of Portugal, Elena of Montenegro, Louise of Hesse-Kassel, and Maria Luisa of Savoy. After her are Margaret of Burgundy, Queen of France, Saskia van Uylenburgh, Marie of Anjou, Inês de Castro, Sophia of Nassau, and Louise of Sweden.

Among people born in 1154, Constance, Queen of Sicily ranks 1. After her are Sancho I of Portugal, Sancho VII of Navarre, Vsevolod the Big Nest, Minamoto no Yoshinaka, Maria Komnene, Queen of Jerusalem, Sancha of Castile, Queen of Aragon, Robert II, Count of Dreux, and Benoît de Sainte-Maure. Among people deceased in 1198, Constance, Queen of Sicily ranks 3. Before her are Averroes and Pope Celestine III. After her are Marie of France, Countess of Champagne, William III of Sicily, Al-Aziz Uthman, Sophia of Minsk, Dulce of Aragon, Frederick I, Duke of Austria, Eustathius of Thessalonica, and Ruaidrí Ua Conchobair.