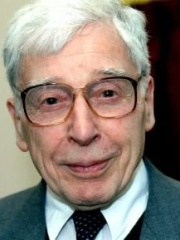 Sir Robert Geoffrey Edwards (27 September 1925 – 10 April 2013) was an English physiologist and pioneer in reproductive medicine, and in-vitro fertilisation (IVF) in particular. Along with the surgeon Patrick Steptoe, and the nurse Jean Purdy, Edwards successfully pioneered conception through IVF, which led to the birth of Louise Brown on 25 July 1978. They founded the first IVF programme for infertile patients and trained other scientists in their techniques. Read more on Wikipedia

Since 2007, the English Wikipedia page of Robert Edwards has received more than 21,468 page views. His biography is available in 64 different languages on Wikipedia making him the 65th most popular physician.

Among physicians, Robert Edwards ranks 64 out of 438. Before him are René Favaloro, Hilary of Poitiers, Robert Bellarmine, Emil von Behring, Albert Szent-Györgyi, and Christiaan Eijkman. After him are Róbert Bárány, Jan Evangelista Purkyně, Cyril of Jerusalem, Herophilos, Francesco Redi, and Gerhard Armauer Hansen.