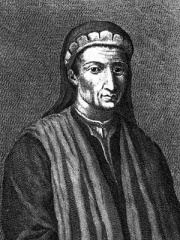 Leonardo Bruni (or Leonardo Aretino; c. 1370 – March 9, 1444) was an Italian humanist, historian and statesman, often recognized as the most important humanist historian of the early Renaissance. He has been called the first modern historian. Read more on Wikipedia

Leonardo Bruni was an Italian humanist and historian who was born in 1370 and died in 1444. He is most famous for his work on the history of Florence, which he wrote in Latin.

Among people born in 1370, Leonardo Bruni ranks 6. Before him are Pope Gregory XI, Antipope John XXIII, Isabeau of Bavaria, John VII Palaiologos, and Olaf II of Denmark. After him are Gentile da Fabriano, Erasmo of Narni, Lorenzo Monaco, Frederick I, Elector of Saxony, Antipope Clement VIII, and Švitrigaila. Among people deceased in 1444, Leonardo Bruni ranks 3. Before him are Władysław III of Poland and Robert Campin. After him are Bernardino of Siena, Olivera Despina, Mark of Ephesus, Julian Cesarini, John Beaufort, 1st Duke of Somerset, Joseph Albo, and Gianfrancesco I Gonzaga, Marquess of Mantua.