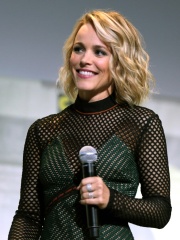 Rachel Anne McAdams (born November 17, 1978) is a Canadian actress. After graduating from a theater degree program at York University in 2001, she worked in Canadian television and film productions, such as the drama film Perfect Pie (2002), for which she received a Genie Award nomination, the comedy film My Name Is Tanino (2002), and the comedy series Slings and Arrows (2003–2005), for which she won a Gemini Award. In 2002, she made her Hollywood film debut in the comedy The Hot Chick. Read more on Wikipedia

Since 2007, the English Wikipedia page of Rachel McAdams has received more than 20,846,924 page views. Her biography is available in 74 different languages on Wikipedia making her the 840th most popular actor.

Daily Mail
Rachel McAdams puts on a leggy display in a thigh-skimming minidress as she makes a grocery run
The 41-year-old Mean Girls star teamed her grid patterned minidress with a light blue baseball cap, surgical face mask and a pair of tortoise sunglasses.
By Deirdre Simonds For Dailymail.com