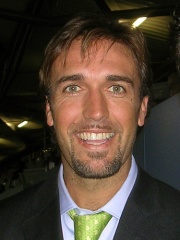 Gabriel Omar Batistuta (Spanish pronunciation: [ɡaˈβɾjel oˈmaɾ βatisˈtuta]; born 1 February 1969) is an Argentine former professional footballer. During his playing career, Batistuta was nicknamed Batigol ([batiˈɣol]) as well as El Ángel Gabriel ([el ˌaŋxel ɣaˈβɾjel]; Spanish for Angel Gabriel). Regarded as one of the greatest players of all time, noted in particular for powerful strikes from volleys or from distance while on the run, in 1999, Batistuta placed third for the FIFA World Player of the Year award. Read more on Wikipedia

Since 2007, the English Wikipedia page of Gabriel Batistuta has received more than 2,579,468 page views. His biography is available in 59 different languages on Wikipedia making him the 88th most popular soccer player.