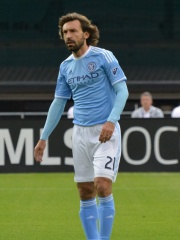 Andrea Pirlo (Italian pronunciation: [anˈdrɛːa ˈpirlo]; born 19 May 1979) is an Italian professional football coach and former player who was most recently the head coach of Serie A club Juventus. Considered one of the best deep-lying playmakers ever, Pirlo was renowned for his vision, ball control, technique, creativity, passing, and free kick ability.Pirlo began his club career in 1995 as an attacking midfielder with hometown club Brescia, winning the Serie B in 1997. He signed for Serie A club Inter Milan a year later, but limited game time and loans away from the club saw him transfer to cross-city rivals AC Milan in 2001. Read more on Wikipedia

Andrea Pirlo is most famous for being a midfielder for Juventus and the Italian national team. He is known for his excellent technique, vision, and long-range passing.