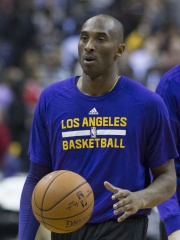 Kobe Bean Bryant ( KOH-bee; August 23, 1978 – January 26, 2020) was an American professional basketball player. A shooting guard, he spent his entire 20-year career with the Los Angeles Lakers in the National Basketball Association (NBA). Regarded as one of the greatest players of all time, Bryant helped the Lakers win five NBA championships, and was an 18-time All-Star, a 15-time member of the All-NBA Team, a 12-time member of the All-Defensive Team, the 2008 NBA Most Valuable Player (MVP), and a two-time NBA Finals MVP. Bryant also led the NBA in scoring twice, and ranks fourth on the league's all-time regular season scoring and all-time postseason scoring lists. Born in Philadelphia and partly raised in Italy, Bryant was recognized as the top high-school basketball player in the U.S. Read more on Wikipedia

Kobe Bryant is most famous for being a professional basketball player. He played for the Los Angeles Lakers and won five NBA championships with them.