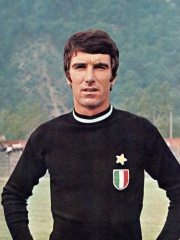 Dino Zoff (pronunciation: [ˈdiːno dˈd͡zɔf]; born 28 February 1942) is an Italian former professional footballer who played as a goalkeeper. He is the oldest ever winner of the World Cup, which he earned as captain of the Italian national team in the 1982 tournament, at the age of 40 years, 4 months and 13 days. He also won the award for best goalkeeper of the tournament and was elected to the team of the tournament for his performances, keeping two clean-sheets, an honour he also received after winning the 1968 European Championship on home soil. Read more on Wikipedia

Dino Zoff is most famous for his penalty save in the final of the 1970 World Cup.