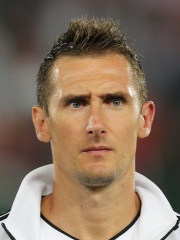 Miroslav Josef Klose (German: [ˈmiːʁoslaf ˈkloːzə] (listen), Polish: Mirosław Józef Klose; born 9 June 1978) is a German former professional footballer who played as a striker. Klose is widely regarded as one of the best strikers of his generation and holds the record for the most goals scored in FIFA World Cup tournaments.Klose is best known for his performances with the German national team. He was part of the squad that won the 2014 FIFA World Cup, having previously finished second (2002) and third (2006, 2010) in the competition, and as runner-up at UEFA Euro 2008 and joint-third place at UEFA Euro 2012. Read more on Wikipedia

Miroslav Klose is most famous for being the all-time leading goalscorer for Germany's national team.