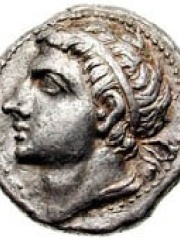 Cleomenes (, though some older reference works give the pronunciation with the accent on the penult, which is closer to the Greek; Greek Κλεομένης Kleomenes; died c. 489 BC) was an Agiad King of Sparta in the late 6th and early 5th centuries BC. During his reign, which started around 519 BC, he pursued an adventurous and at times unscrupulous foreign policy aimed at crushing Argos and extending Sparta's influence both inside and outside the Peloponnese. He was a brilliant tactician. Read more on Wikipedia

Cleomenes I was a king of Sparta who was famous for his reforms and his military campaigns.

Page views of Cleomenes IS by language

Among politicians, Cleomenes I ranks 2,131 out of 15,710. Before him are Seqenenre Tao, Ellen Johnson Sirleaf, Dom Pérignon, Emeric Thököly, Choe Yong-gon, and Francisco Solano López. After him are Leonid Kravchuk, Shajar al-Durr, Kara Ahmed Pasha, Moctezuma I, Emperor Annei, and Al-Hakam II.

Others Deceased in 489 BC