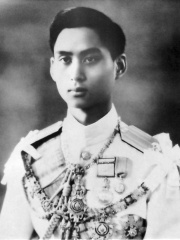 Ananda Mahidol (Thai: พระบาทสมเด็จพระปรเมนทรมหาอานันทมหิดล; RTGS: Ananthamahidon; 20 September 1925 – 9 June 1946), posthumous reigning title Phra Athamaramathibodin (Thai: พระอัฐมรามาธิบดินทร), was the eighth monarch of Siam from the Chakri dynasty as Rama VIII. At the time he was recognised as king by the National Assembly in March 1935, he was a nine-year-old boy living in Switzerland. He returned to Thailand in December 1945, but six months later, in June 1946, he was found shot dead in his bed. Although at first thought to have been an accident, his death was ruled a murder by medical examiners, and three royal pages were later executed following very irregular trials. Read more on Wikipedia

Among politicians, Ananda Mahidol ranks 1,456 out of 15,710. Before him are Vallabhbhai Patel, Richard of York, 3rd Duke of York, Mentuhotep II, Constantine VIII, Victor Amadeus II of Sardinia, and Amaro Pargo. After him are Charles II of Navarre, Naram-Sin of Akkad, Zhao Ziyang, Charlotte, Grand Duchess of Luxembourg, Haakon the Good, and Yeonsangun of Joseon.