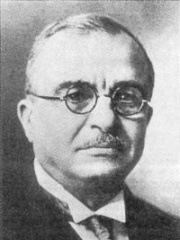 Ioannis Metaxas (; Greek: Ιωάννης Μεταξάς; 12 April 1871 – 29 January 1941) was a Greek military officer and politician, serving as Prime Minister of Greece from 1936 until his death in 1941. He governed constitutionally for the first four months of his tenure, and thereafter as the strongman of the 4th of August Regime after his appointment by King George II. Born to an aristocratic family in Ithaca, Metaxas took part in the Greco-Turkish War of 1897 and the Balkan Wars (1912–13), quickly rising through the ranks of the Hellenic Army. A Monarchist during the National Schism, Metaxas unsuccessfully opposed Prime Minister Eleftherios Venizelos and Greece's entry in World War I; thus, he was exiled to Corsica in 1917. Read more on Wikipedia

Ioannis Metaxas was most famous for being the dictator of Greece from 1936 to 1941.

Among politicians, Ioannis Metaxas ranks 1,597 out of 15,710. Before him are Musaylimah, Lala Mustafa Pasha, Peter IV of Aragon, Moshe Sharett, Simon de Montfort, 5th Earl of Leicester, and John IV of Portugal. After him are Alexei Petrovich, Tsarevich of Russia, Æthelred I, King of Wessex, Louis II of Italy, Elisa Bonaparte, Pasquale Paoli, and Afonso III of Portugal.