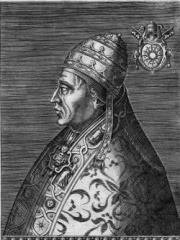 Peter of Candia, also known as Peter Phillarges (c. 1339 – May 3, 1410), named as Alexander V (Latin: Alexander PP. V; Italian: Alessandro V), was an antipope elected by the Council of Pisa during the Western Schism (1378–1417). He reigned briefly from June 26, 1409 to his death in 1410, in opposition to the Roman pope Gregory XII and the Avignon antipope Benedict XIII. In the 20th century, the Catholic Church reinterpreted the Western Schism by recognizing the Roman popes as legitimate. Read more on Wikipedia

Alexander V was the first antipope of the Western Schism. He was born in Venice and was created cardinal by Pope John XXII. He was elected pope in 1409 after the death of Pope Gregory XII, but was never recognized as pope by the Eastern Orthodox Church.

Page views of Antipope Alexander VS by language

Among people born in 1339, Antipope Alexander V ranks 3. Before him are Pope Innocent VII and Rudolf IV, Duke of Austria. After him are Louis I, Duke of Anjou, Eric XII of Sweden, Anna von Schweidnitz, Barquq, Blanche of Bourbon, John IV, Duke of Brittany, Muhammad V of Granada, Juana Manuel, and Frederick, Duke of Bavaria. Among people deceased in 1410, Antipope Alexander V ranks 2. Before him is Martin of Aragon. After him are Rupert, King of Germany, Ulrich von Jungingen, Theophanes the Greek, Louis II, Duke of Bourbon, Yawar Waqaq, Hasdai Crescas, Melchior Broederlam, Joanna Sophia of Bavaria, Spinello Aretino, and John Beaufort, 1st Earl of Somerset.